Who:   All Male Volleyball Athletes U14-U18 regardless of club affiliation or experience

Number of Athletes: 6-8 athletes per Coach

Includes a Jersey for upcoming competitions in the new year if you choose to compete with the group when that gets here!!!!

Required Waiver form(please email or mail back in):

Lets’s start the season off with a BANG!!!!!  Fun fast paced mini tournament format with prizes!!!

This will be a great time for the boys to meet the other players and boys coach! We will be on hand to sign the boys up for training and to give you more info.

Sign up for Fall Training before Labor Day and get $5 off your Bjerring Entry!!!!!!

Just bring your receipt with you:)

Auburn, WA â€“ Today during the bi-annual board of directors meeting Ballard High School was admitted as the second member school.Â Â  Â Mark Prescott, a math teacher at Ballard High School, and Liam Moser, a senior, are credited for putting the club together.Â  On the heels of the admittance of the second volleyball club, the association announced its first season to start in 2015, featuring a seeding tournament in October and the Associationâ€™s Championship Tournament in November.Â  Brian Boyer, the Commissioner said that other schools could possibly be admitted at the May Board Meeting, but did not give specific details on prospective schools.Â  Also as part of the meeting Mr. Prescott was named to the third board seat.

Here is the official press release.

From Seattle Parks and Rec:

I wanted to let you all know of a new program being offered through Youth Athletics in the spring of 2015.

This program will be offered to youth ages 10-17.

The season will begin on April 18th and will be offered on Saturdays at regional sites.

Sites will include Bitter Lake, Miller, and Rainier Community Centers.

This information will be included in the winter brochures.Â  Please include this program in your CLASS entry.

If you would like Kristen to do your course entry in CLASS, please contact her atKristen.schuler@seattle.gov or at 5-0520.

We are looking forward to the start of what will become a great new sport reaching out into all communities!

Thanks for your help in getting this program started!

Last year the group of students from Cascade High School were caught flat footed in the championship game against a seasoned club team mostly from Graham-Kampowsin High School, this year they were not to be denied. Â The foe in this years final was a group of students from Curtis High School, most on the South Sound Â Volleyball club team. Â  As the afternoonÂ wore on it was becoming apparent that this group comprised mostly of Jrs and Srs were not going home without hosting the trophy. Â There commitment to volleyball was evident when after the tournament the group huddled together and talked about playing later that evening in Mill Creek, WA, close to the Cascade High School Campus.

The differences in style of play could not be any more apparent in the championship game. Â The team consisting of mostly students from Curtis High School ran a consistent 5-1 throughout the tournament. Â The Cascade students ran the setter out of the middle and rotated to the setter position. Â  As the commissioner put it, “It’s not the style of play, but the perfection of the style of play that wins at this level of volleyball.” Â  To get to the championship the students from Cascade played a host of students from Washington High School, the first ever member school. Â The play was great, and though the eventual champions won in two, Washington came within a few points to push the game to three. Â The more energized match, which may have been the students from Curtis’s downfall was the O’dea students pushing the young team to three games and losing only by a score of 17-15 in the third game. Â  The Tournament Team will be announced tomorrow.

This years tournament featured only 4 teams, but the commissioner blamed it more on moving the date into June, than on lack of interest. Â “If we had kept the same weekend, we would have easily eclipsed 7 teams and really pushed to eight teams. ” said Brian Boyer The commissioner of the WSHSBVA. “It’s a great lesson to learn now, and next week we will have our dates for next year all finalized this time much earlier in the year.” Â WSHSBVA also announced that they would be hosting a Boys Doubles Grass Tournament, next year. Â  Dates and locations have yet to be determined. Â Â Â The tournament was held at the Five12 courts in Puyallup, home to the Lake Tapps Volleyball Club.

South sound has two programs this year in which boys can participate.

Mark May 6th on your calendar as a break through in the pursuit to give further opportunities for students to play interscholastic sports. Yesterday in Parkland, WA at Washington High School just outside Mchord Air Force base in Tacoma, WA six students practiced as a team in the hopes to represent its school and community in interscholastic sport. The practice was Led by volleyball enthusiast Konstatin Stakhovich who is of Russian-Ukrainian heritage and currently a Math teacher at Washington High School. Coach K was very pleased to introduce this sport to his former school and is excited about the opportunities this will provide for the students in and around Parkland, WA. If you would like more information about the team click on the sign up button and a WSHSBVA rep would love to help you form the next team at your high school.

After practice it was made official that Washington High School would become the first member school. Â  Konstatin was then appointed as the 1st official Board Member of the Association. Â As the charter school he will also assume all the duties asÂ Chairman of the Board, but obviously will be helped by the Commissioner of the WSHSBVA. Â  Â  “Now it is real, there are no more what ifs left, we have students who want to play volleyball.” Â said the commissioner Brian Boyer. Â  “Now we have two questions, Will someone join them, andÂ will the volleyball community support them? Â I’m more concerned with the first than the second.” Â  Â  He would later say that it was 50-50 if there would be a fall season next year. “We have other schools who are real close, but they have hurdles to overcome, there is definitely student interest, I’m curious to see if this will push a team over the edge, get them over the hump, but we will see.” Â  Coach K says they are in it for the long haul and at least the tournaments provided by USAV and the Association should be enough to keep the kids engaged.

As you may or may not know, the NCAA tournament is in a couple weeks and unlike the massive NCAA tournament known as March Madness, volleyball has only 5 spots, however over the next week (and in some cases already in progress) the four conference tournaments will begin (MPSF, Conference Carolinas, MIVA, and EIVA).

As far as the Northwest connection is concerned I dont know if this years excitement will ever be as high as this years could be.Â

Any year that Matt West the Shorewood High School graduate is involved, the tournament is going to be a special year for Washington prospects. His sophmore year has been special, especially when you consider that Micah Christenson the setter from USC has taken any thunder away from Matt’s all american sophmore season. Christensen after playing for the U.S. Menâ€™s National Team in the off-season and lead the US Men’s team to gold at NORCECA’s which was held 3 hrs north of Seattle in Langley, British Columbia. His numbers are clearly better than Matt’s, Christenson led the nation with an 11.69 assists per game average and was first among setters in the nation with a 2.36 digs per game average. Â While Matt was still dominant with 11.10 assists per game average and was second among the nationâ€™s setters with a 2.13 digs per game average. While Matt’s numbers weren’t as impressive, he did lead his team to a share of the MPSF crown while USC made it in the conference tournament,at the beginning of the weekend USC was on the outside looking in.Â  Pepperdine plays host against Long Beach State on Saturday at 7:00 pm.

Another 2nd seed Lewis University in the MIVA conference features Bishop Blanchette’s Tom Logan,(never to be confused with Logan Tom). Though not a consistent starter for the team, he is a local kid and we will be rooting for him, though the Flyers have a rough go of it since the #1 team in the country is Loyola of Chicago, and they have yet to lose in conference.

But one more local Terence Veile out of Fairfield, Wa. who attended near by Liberty High School plays for Quincy University and will get the first crack at taking down the unbeaten Loyola of Chicago on Thursday at 7:00 central. He like Tom doesn’t get as much court time as we would like to see but we will be rooting for the Hawks on Thursday.

I don’t know if anything will be televised, but that is the local break down for this years post season.

If I missed someone please let me know:
wshsbva@gmail.com

Please read this Press Release from YVBA!
If you know any boys that play VOLLEYBALL or would like to learn, this is a FREE OPPORTUNITY TO PLAY!!

Our goal is to keep our core YVBA team playing together while we grow our numbers. Since boys VB is new to this area, we are seeking to introduce our sport to as many boys as possible. With this in mind, participation in the Winter practices will be free of charge. These practices will be open to any boys interested in learning the game and/or preparing for the Spring season. Please pass this info along to any other 12U, 14U or 16U players who also might be interested, all are welcomed.

We have already secured our regular Sunday afternoon time slot (3-5) and are seeking to add more as soon as we know what openings there are in the gym. Here is a list of the confirmed dates so far:

Our practice facility is at St. Anthonyâ€™s School in Tigard (12645 SW Pacific Hwy).

I hope to see you this weekend,
Coach Wade 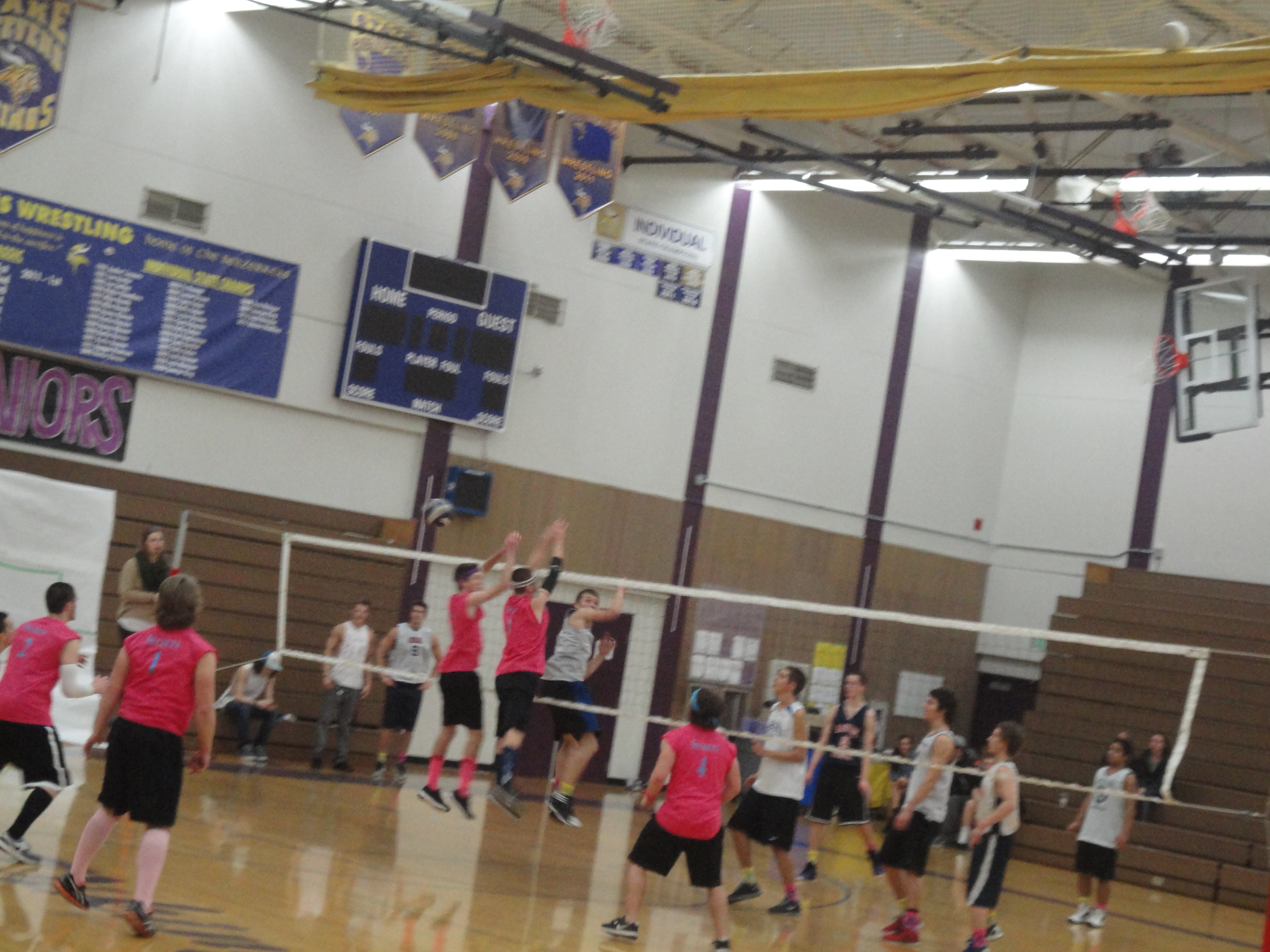 At Lake Stevens High School as part of the school’s battle of the sexes, 8 teams took to the floor in a double elimination tournament that ended with Cloud Nine and Victorious Secret playing in the finals. Cloud Nine had come through the losers bracket to beat the winner’s bracket top contestant Victoria’s Secret. It was a great event.